For the Love of Guitars 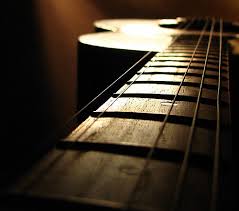 For the adoration of guitars in its emergence within the world of music; people have travelled a long way to find its beautiful sound. Hearing and sight are a couple of the senses triggered by the music coming from the strumming of the strings. Many cultures look forward to the reinvention of the guitar's orchestration in a new piece of music.

The Acoustic guitar is one of the most familiar pieces in this family of instruments. The body is hollowed out and the strings are generally made of nylon. It is favored by artists who want to convey a sensual and earthy sound. This particular type is the original of the group and has been used for over a thousand years.

A more modern version of this device would be the electric guitar-it was introduced to the world in the 1930's. The body was initially hollow until further research revealed that a solid frame produced a better performance. Its sounds rely on the support of an amplifier which electronically manipulates the sound. This electrical unit has had a profound influence on popular culture. Classical, Reggae, and Rock music are just a few of the genres that rely on guitars to solidify their niche.

Making sounds to convey a specific message or emotional feeling is the foundation that aids in the development of music. There are some natural resources like sticks and rocks that create sounds that are specifically generated to make people dance. Other familiar objects like spoons and beans in a bowl are utilized to help people explore the possibilities.

Scientist and musicians have similar practices in their approach to research and discovery. Their commitment to finding the next big thing requires a great deal of creativity and persistence. They have a skill for identifying new angles and formulas to adjust the limits of what they know. A scientist might be searching for a specific cure while the musician is trying to inspire the feeling of the process. There are some sections in the world where consumers believe that music brings healing to life.

Not many people can remember their very first encounter with rhythmic sounds. However, most can recall certain events in their lives where the music defined their experience. The importance of sound makes its way into the planning processes of weddings, birthday parties, coming of age ceremonies and so much more.

For the love of guitars musical scholars continue to explore new territories to expand the lives of others. Goals have been identified and fantasies have been achieved with the support of music. The artists who have honed the craft of this instrument inspire the intellectual and emotional advancement of mankind.